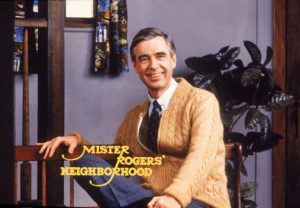 Growing up I was a sucker for Mister Rogers’ Neighborhood (that or else it was literally the only thing on TV at the time and my parents needed a break so they plopped me in front of the black and white for a little respite).

I loved the sing-songy opening number, “Won’t you be my neighbor?” I can still see Mr. Rogers happily walking through the front door, hanging up his coat, putting on a comfy cardigan, taking off his work shoes, and inviting me to hang out with him and his quirky friends for a little bit.

Fred Rogers was the real deal. At least he seemed so to four or five-year-old me. He wasn’t an actor playing a character paid to be interested in kids. He seemed to genuinely care that I was important.

“One of the greatest gifts you can give anybody is the gift of your honest self,” Fred Rogers once said. “I also believe that kids can spot a phony a mile away.”

I didn’t think Mr. Rogers was a phony.

An introverted, overweight child, Fred Rogers was often homebound due to childhood asthma. He said later in life that he knew the pain of loneliness from his own childhood.

This social isolation early in his life drove him to be aware of the insecurities and needs of other children in similar conditions, leading him to dedicate his life to making every child feel loved and part of a safe and caring neighborhood.

As I reflect on Mr. Rogers’ key messages, I am struck by how applicable his life’s work is to many of the challenges confronting us in Charlotte today.

No doubt we have our work cut out for us, as the Foundation For The Carolinas’ Opportunity Task Force recommendations will soon make crystal clear. Charlotte by many measures is the most difficult place in the country for those on the bottom rung of the economic ladder to climb out of poverty.

Our educational system is not designed so that all of our children thrive. There are multiple obstacles to success placed in front of those with the least – from poor access to health care services, lack of affordable housing options, and in some cases non-existent access to basic necessities like affordable, quality food.

These are enormous, structural barriers requiring collective action and a sustained, multi-year, multi-sector effort to make progress so that opportunities to climb and stay out of poverty can be achieved.

Even given these extraordinary challenges, I believe that perhaps our greatest challenge in Charlotte is that while we may know intellectually that many of these conditions persist, we don’t know on a personal level what it means to live in poverty and with limited resources in Charlotte.

We don’t truly know our neighbors.

And if we don’t know our neighbors, we can’t really understand what it is like to live in zip codes in Charlotte where you will find some of the deepest pockets of poverty in all of North Carolina.

Mr. Rogers knew that he was one of the fortunate ones, born into a family of faith with a supportive community that would always have his back. He understood that what made him successful is that he had people who believed in him. He dedicated his life to reaching out to every child – regardless of their economic station in life or the barriers they might confront – to let them know they are loved and that someone believes in their potential.

“Anyone who has ever been able to sustain good work has had at least one person – and often many – who have believed in him or her,” Rogers said. “We just don’t get to be competent human beings without a lot of different investments from others.”

As we hear from the Task Force in coming weeks about opportunities to make a real difference in people’s lives, I will keep Fred Rogers’ core message of caring and loving our neighbors – all of our neighbors – front and center.